Explore the mysterious Sepik River. Witness the infamous crocodile initiation ceremony and visit the stilt houses on Lake Kambaraumba. Wander idyllic tropical isles fringed with sandy beaches and bounded by an endless coral reef. Discover Papua New Guinea’s distinctive landscapes – both above and below the water.

Return charter flights ex Cairns ARE INCLUDED in the cruise tariff. This itinerary is provided as an example only – prevailing conditions, local arrangements and indeed, what we discover on the day, may cause variation. Helicopter flights can be purchased additionally to the cruise tariff as a package or individually. 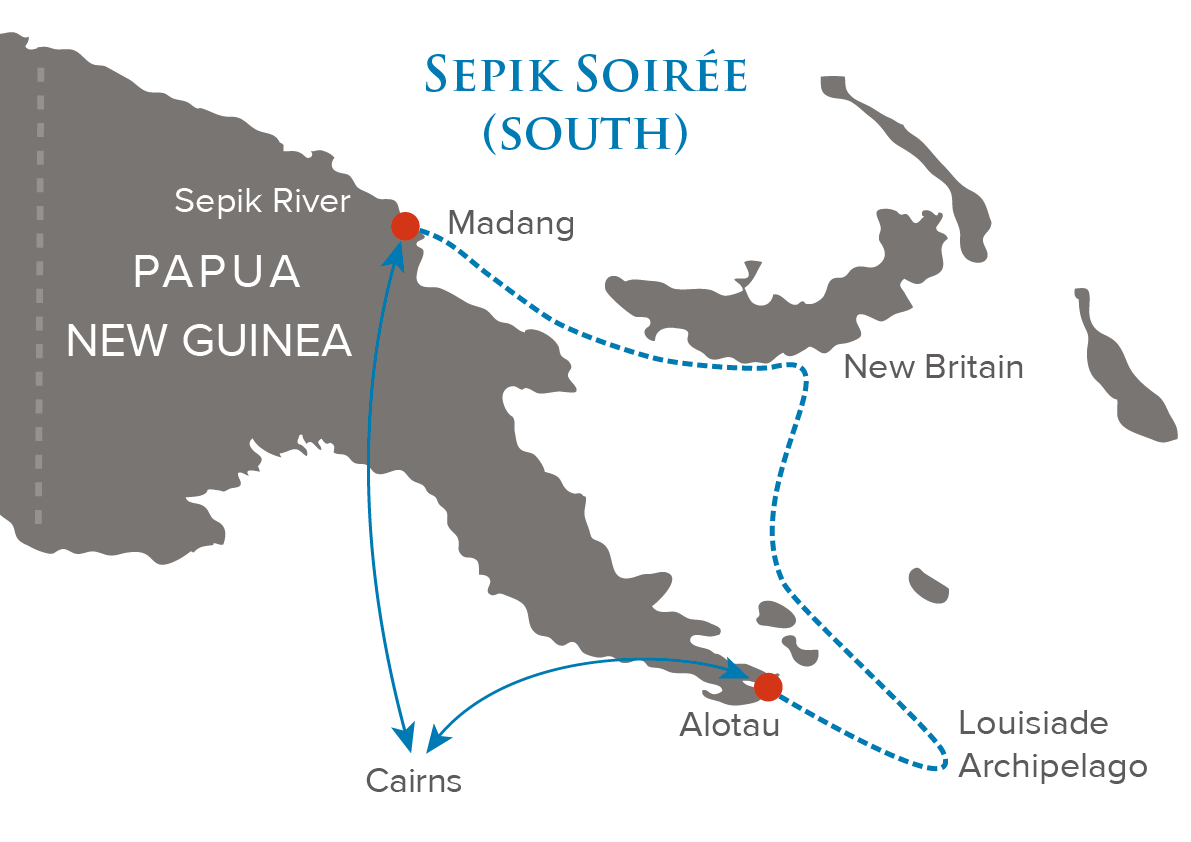 Your adventure begins amidst the tropical charm of Cairns. After collection from your hotel, our attentive crew members will escort you aboard TRUE NORTH’s chartered flight to Madang. After attending to immigration formalities you will find the magnificent TRUE NORTH ready to begin your Sepik Soirée!

Enjoy a welcome aboard cocktail and sample hors d’oeuvres in the alfresco bar as we cruise out into the Bismarck Sea. The chefs are sure to have prepared something extra special tonight, the first of the many signature dining experiences! 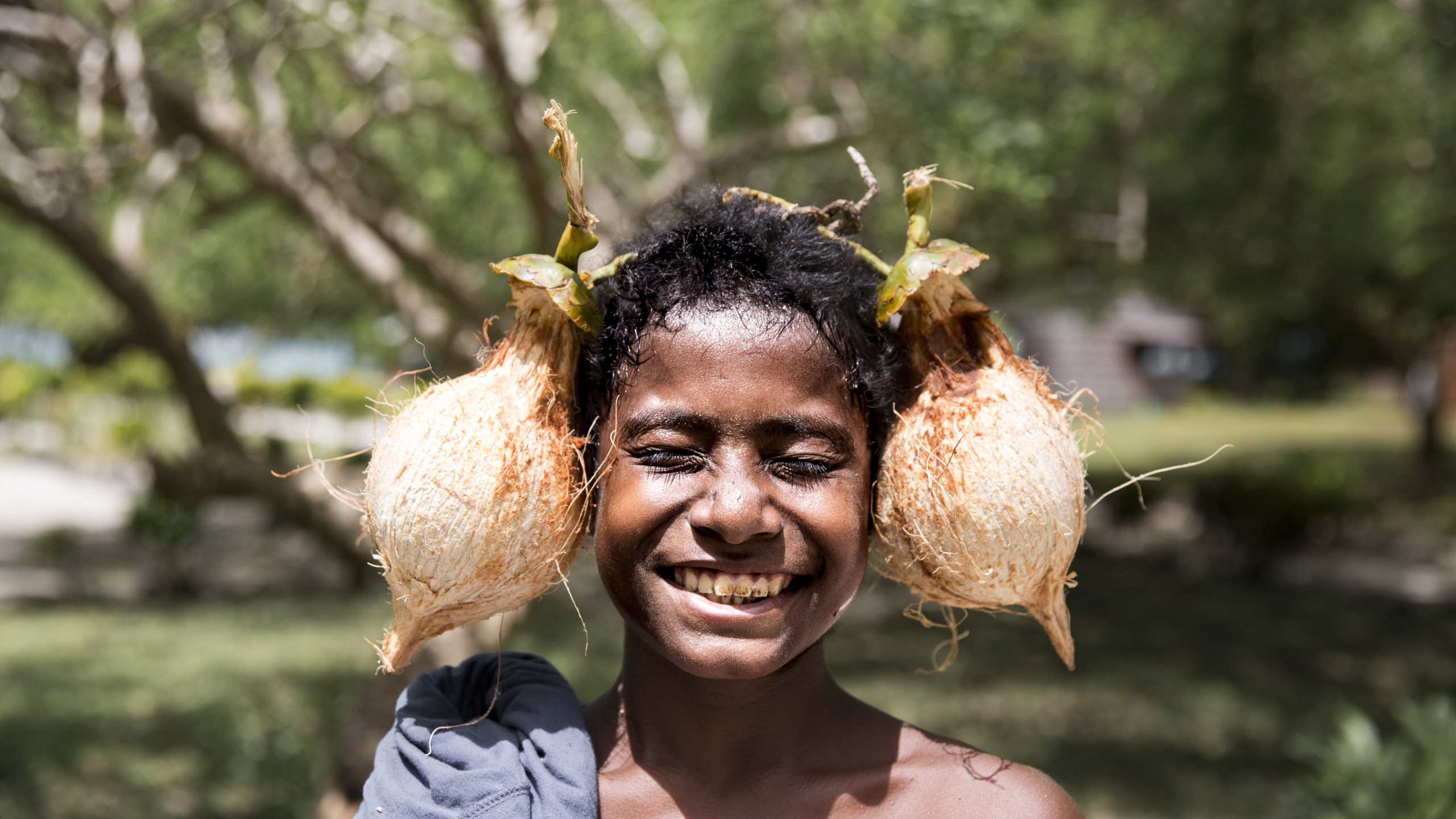 Today we visit Karkar – a large oval-shaped volcanic island about 25 kilometres in length and 19 kilometres in width. In the centre of the island, there is an active volcano with two nested calderas. The latest eruptions on this island occurred in the 1970s. The island has a relatively large population of approximately 50,000. The two main exports from the island are cacao and coconuts, which can grow in the same soil due to height differences. The large plantations are generally family-owned.

Kulili Harbour offers excellent fishing, snorkelling and diving. The ship’s helicopter will take to the skies to explore the fascinating topography of Karkar.

Over lunch, the TRUE NORTH repositions to the north side of Karkar Island. Time to head ashore to wander through the gardens of a nearby copra and cacao plantations and factory. The adventure boats will also be standing-by for guests who would like to snorkel or wet a line! To conclude the afternoon – all aboard the adventure boats for a TRUE NORTH ‘raft up’ before another dinner to remember! 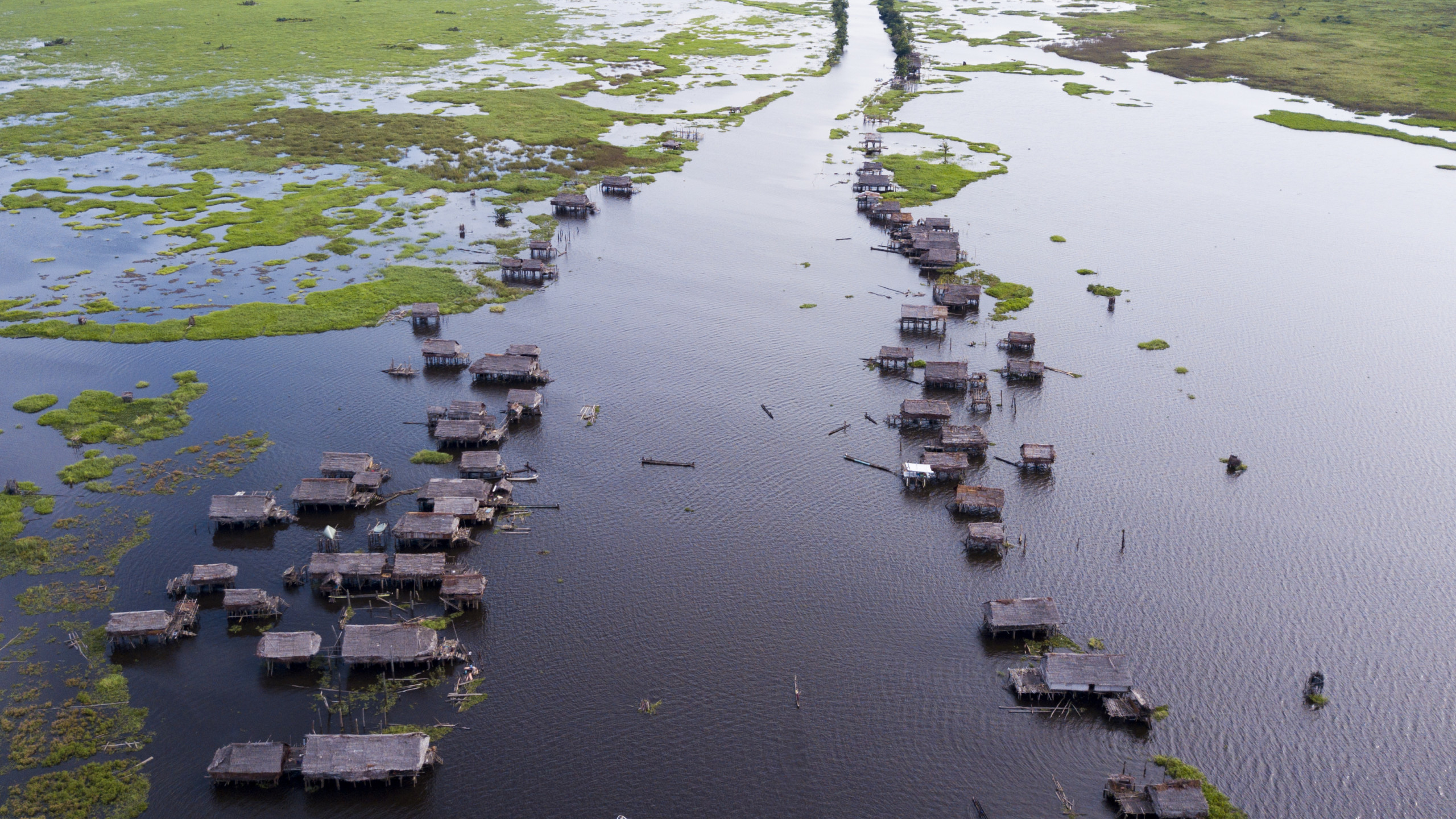 The Sepik River is the longest river in Papua New Guinea, one of the great river systems of the world! As far as adventure is concerned, it doesn’t get much better. Just mention of this mighty watercourse is enough to conjure up excitement.

Biologically, the river system is possibly the largest uncontaminated freshwater wetland system in the Asia-Pacific region. The river’s total length is 1,126 kilometres and it has a drainage basin of over 80,000 square kilometres! For much of its length, the river supports a 5-10 kilometre wide belt of active meanders, a floodplain that can be up to 70 kilometres wide and, extensive backwater swamps. However, unlike many other large river systems, the Sepik has no delta – it flows straight into the sea.

The entire Sepik basin remains a largely undisturbed environment. Local villagers have lived along the river for many millennia and the river has formed a basis for food, transport and culture.

The Sepik is also revered for its art. The tribes living along the river produce magnificent wood carvings and artful clay pottery. Many tribes use garamut drums in rituals; the drums are formed from long, hollowed-out tree trunks carved into the shape of various totem animals.
The TRUE NORTH will arrive at the mouth of the Sepik at first light before proceeding 70 nautical miles upstream. Then it’s away in the adventure boats and the ship’s helicopter for days filled with exploration and discovery.

Witness an elaborate coming of age ceremony where young men are scarified in the image of the crocodile. Other highlights include the township of Angoram – here the waterside market presents as a fantastic opportunity to purchase local carvings. At Kambaraumba village we will be greeted by a sing sing featuring giant crocodile puppets that gyrate through crowds of dancers and drummers – truly a feast for the senses! We also explore the maze of swamps and small waterways that lead to Lake Kambaraumba and its stilt village – a community of huts, churches, schools and animal enclosures built above the waters of the lake 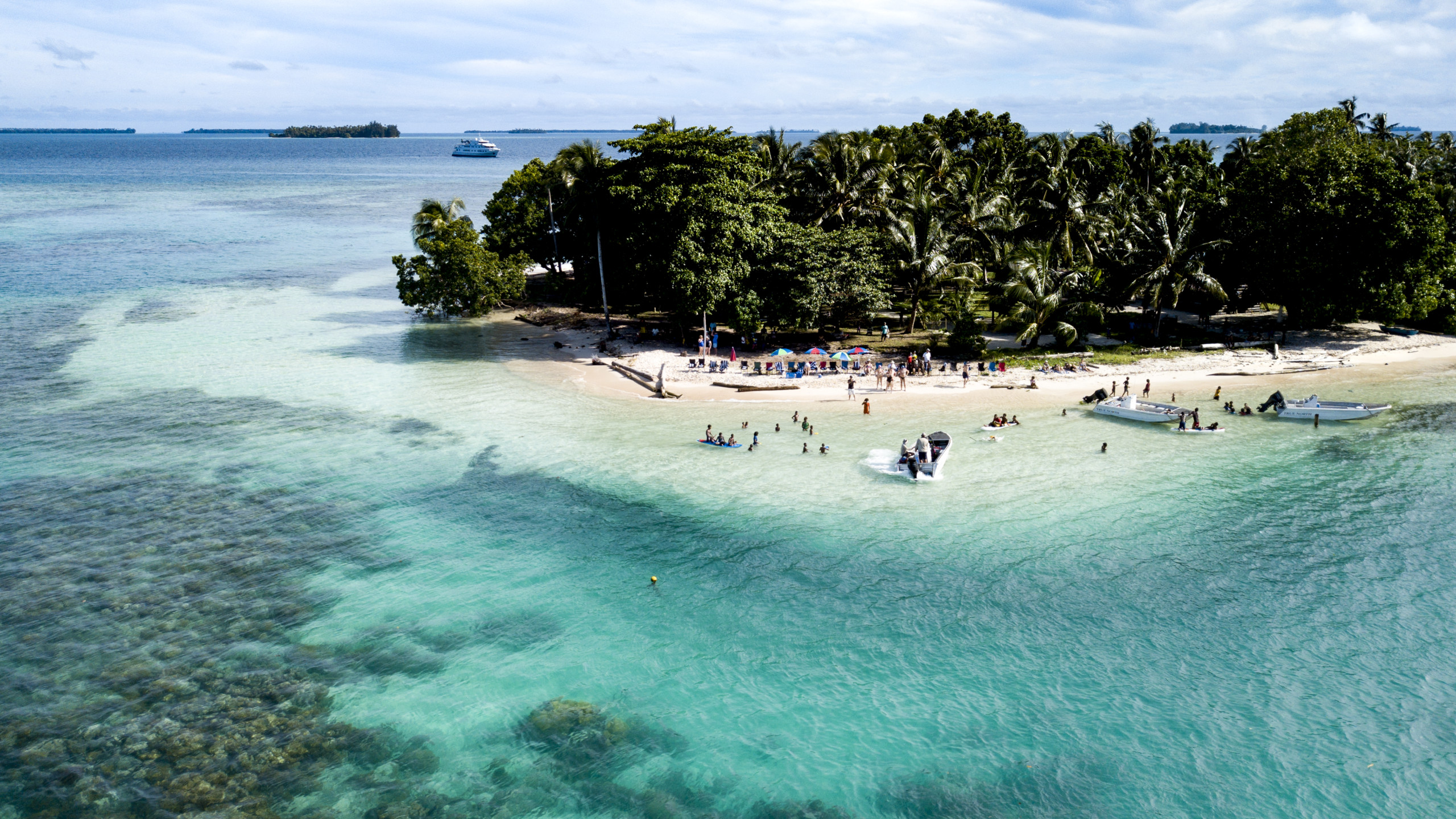 This morning we visit Long Island which lies in the Vitiaz Strait between New Britain and Papua New Guinea’s main island.
Two stratovolcanoes are located on the island – Mount Reaumur and Cerisy Peak. The summit of the volcanic complex has collapsed producing a large caldera that is more than 10 kilometres across! It may be possible to hike to the lake that fills the caldera – Lake Wisdom. Helicopter flights over the lake promise to be another cruise highlight!

The island is also known as a turtle hatchery and it may be possible to schedule an early evening visit to a likely beach. 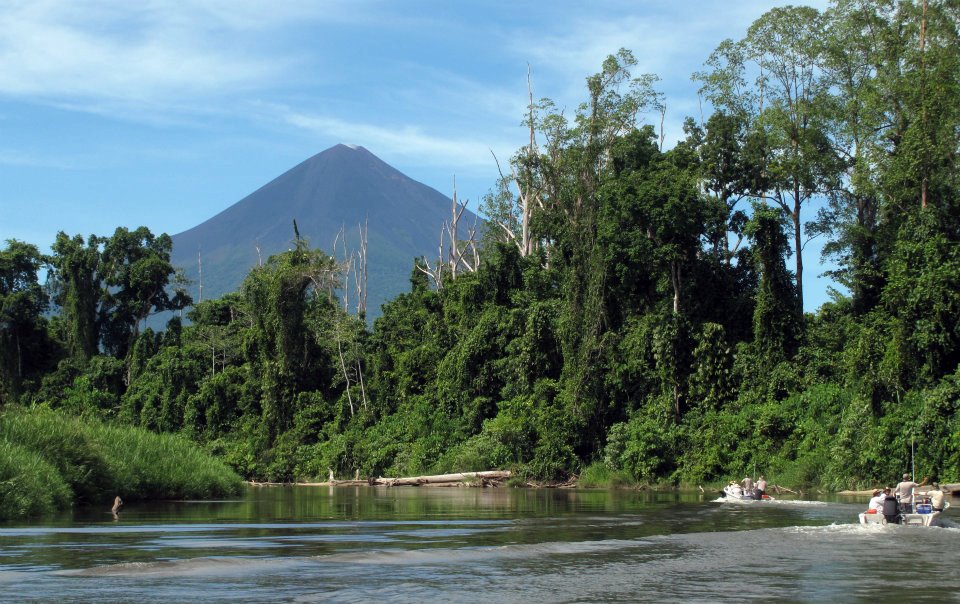 Tavolo is situated in the Pomio District of East New Britain Province. The area features extensive fringing coral reef and pristine forest. Approximately 500 people live around Tavolo in small hamlets. The area is about ‘a day’s walk’ to the nearest government station and surrounding rivers add to the isolation.

The PNG government has established a small Wildlife Management Area around Tavolo and the community is working towards extending its boundaries. The people of Tavolo are also trying to establish no-take zones on the adjacent reef and they are committed to preventing any large scale development. A visit to this small community should provide fascinating ‘village-level’ insight into the struggle to preserve Papua New Guinea’s rich natural history.

The Lindenhafen area, well-regarded for coral reef and fish life is also not to be missed.

Wake to find the TRUE NORTH off the coast of New Britain and beautiful Jacqinot Bay.

Dense jungle and mighty rivers will dominate proceedings today as the True North’s shallow draft provides unique access! Join our comfortable adventure boats as we explore deeper into the jungle visiting isolated villages that have little contact with the outside world and visit a grotto where freshwater pounds out of a rock face onto a pristine beach. No matter what you desire, the coast of New Britain promises unrivalled adventure!
Another star-filled night in the silhouette of the jungle, and tonight is party night – things might just get a little ‘South Pacific’! 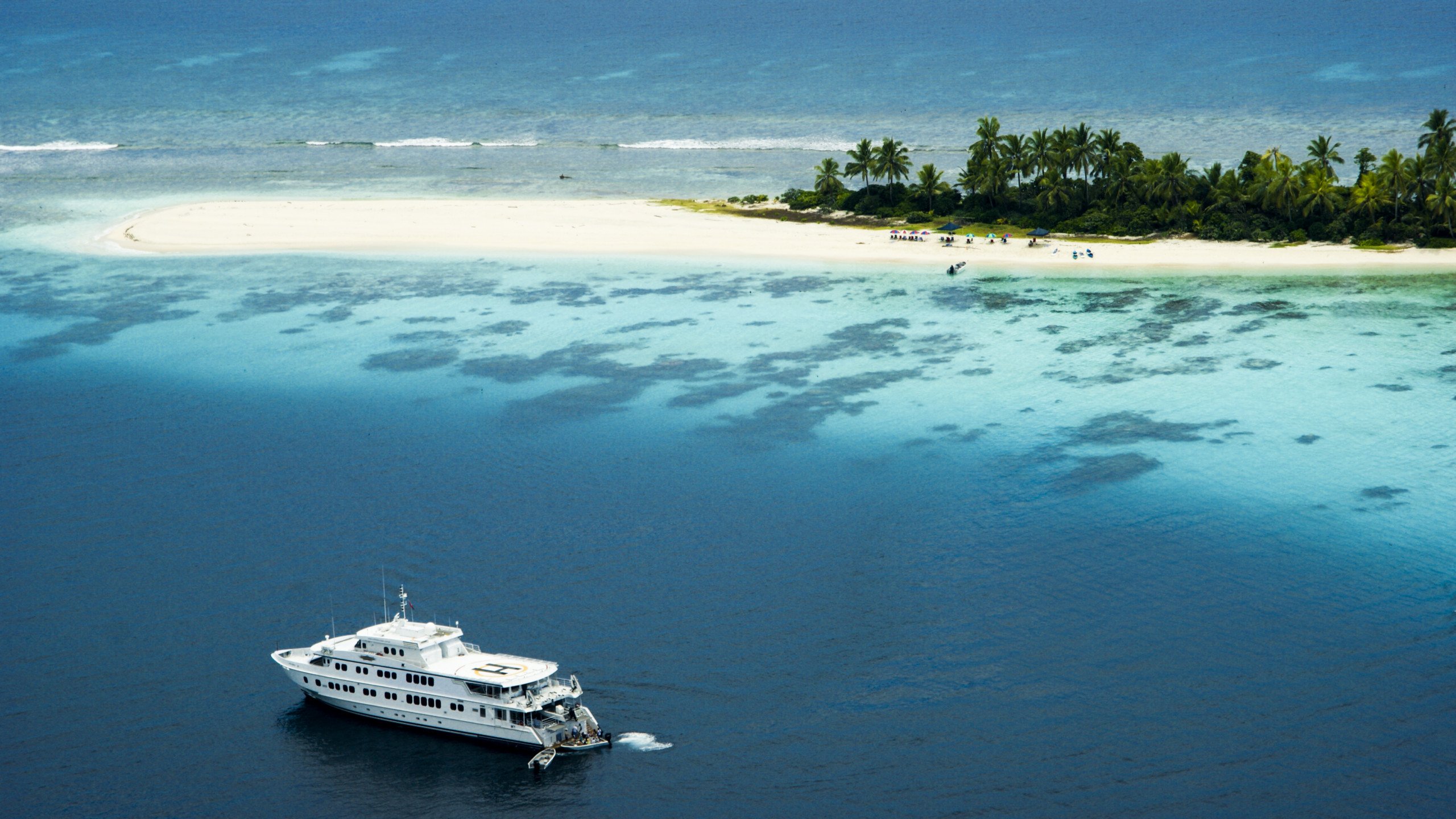 As you gaze out your cabin window this morning you will notice that our overnight passage has delivered us to a very different place.
This morning we will be anchored in the middle of the Solomon Sea amongst the corals of Star Reef and, the strikingly beautiful Lusancay Islands.

So today let’s have some fun at the beach. Take a stroll around your very own island (the Lusancays are uninhabited), snorkel in the shallows or drop off the outer- reef for the dive of a lifetime! The fishing is second to none – battle with tuna, mackerel or even a sailfish. If the fishers have held up their end of the bargain, then coral trout might even be tonight’s fare but regardless, there are bound to be plenty of adventures to re-live in the ship’s bar!

Start the day with a refreshing snorkel; catch your breakfast or just stroll along a pristine beach fringed with coconut palms! Then fill your day with swimming, island walks and village life as we cruise the beautiful fiords of Tufi. The ship’s helicopter will spoil with exhilarating flights to the Isurava Memorial on the Kokoda Track. Tufi is renowned for SCUBA diving and our guides will also be looking forward to a spot of mackerel fishing as the setting sun heralds the end of another day in paradise.

Today we visit Ferguson Island. On the morning walk discover jungle that shelters countless varieties of birds including colourful parrots, hornbills, wildfowl and the famed bird of paradise. Many rare species of butterfly are present and Papua New Guinea is also home to over two-thirds of the world’s orchid species. You may even be lucky enough to see a reclusive tree kangaroo! An excursion to the Hot Springs will top off our final action-packed day together!

This morning we are alongside in Alotau. Transfer to your charter aircraft and the return flight to Cairns. We are already looking forward to welcoming you back on-board – the next time you Go Wild in Style!